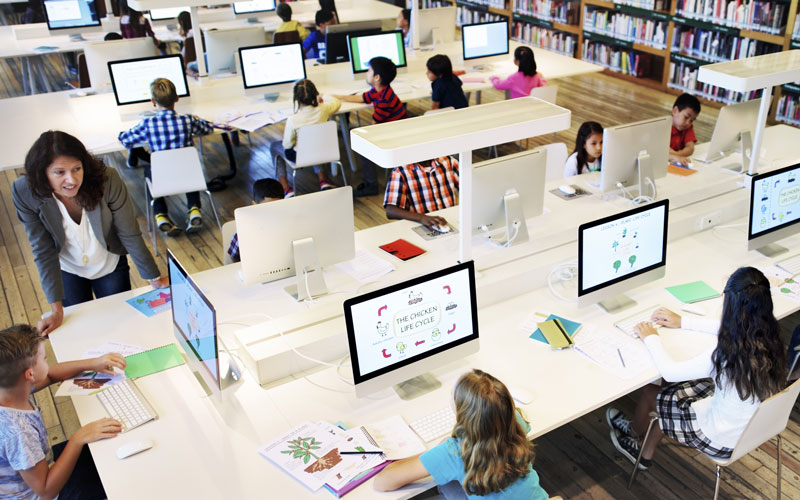 The Digital Takeover And Its Impact On Education

I remember it like it was yesterday, walking down the hall in 3rd grade, all of us in a quiet straight line, heading to the computer lab. We would file in and sit down at one of the many desktops. Over the next hour, we would practice typing and basic computer skills. As someone who still loves to put pen to paper, it was hard to understand the importance of computer skills. Especially in the 90s when computers weren’t as common as they are now. Over the past few decades, the world has undergone such an incredible digital takeover with an immeasurable impact on education.

While it oftentimes feels as though we experienced an all-in-one shift into e-learning over the 2-years of Covid-19, the switch to digital education started much earlier. In the 1960s, at the University of Illinois, USA, is the first example of e-learning as we know it today. Students began learning from computer terminals that were interlinked to form a network. While that doesn’t quite sound like Zoom or Google Classroom, it was a precursor to e-learning. Soon after, the first-ever completely online course was offered in 1984 by the University of Toronto. From there it was a fairly quick jump to the first university (The Open University in Britain) offering online distance learning in the 90s.

Things have come a long way since then. Distance learning became more commonplace, basic computer skill courses turned into complex coding. The ability to get an entire degree without stepping foot on campus became a reality for many. What couldn’t be anticipated, however, was just how much we would come to rely on technology for our education. In 2020 the world was faced with Covid-19 and while we had all the tools, we were unprepared. Suddenly, what was once an option, turned into the norm. Teachers and students alike needed to find ways to adjust to complete distance learning, and that’s when the industry truly kicked off. But what does it mean “kicked-off?”  As we already established, e-learning and distance learning weren’t new concepts, in fact, they’d been around for decades.

So why was the switch so difficult?

So Many Platforms, Too Many Choices: With so many tools available, and no need, at the time, for cohesion between institutions and educators, that excess of choice, the overabundance of options, became too much. Schools, teachers, and students needed to rely solely on distance learning tools, but beyond that, they needed the right ones. But learning how to keep things engaging from a screen became the main focus rather than the course material itself. Many struggled to find a platform that was both engaging and organized. That’s where platforms like emaze, Google Classroom, and Moodle shone. Platforms that offer more than simply a video call for remote lectures. A platform like emaze that offers both content creation and LMS, was the key to distance learning success.

What was once a supplementary tool became a lifeline, and that adjustment was where many struggled. Where once upon a time, if a student struggled with an online course they could easily reach out to the teacher and even schedule a face-to-face meeting. Suddenly, it wasn’t just one student, it would be dozens.

Teachers were overwhelmed, learning new systems, figuring out how to adapt lessons to an online format without losing the personal interactions, and still trying to address each student’s needs. Organizations struggled to find the right cohesion between the platforms, to find one that would work for everyone when many already had their preferences. Students struggled to pay attention to a screen for so many hours on end, and keeping track of classes and assignments, in general, became more difficult. But like all things, humans are resilient, and young minds are quick to adjust. So in time distance learning became the norm and the frenzy died down, however, it wasn’t all positive. At least a third of the world’s schoolchildren—463 million children globally—were unable to access remote learning during school closures. On top of that, only 10% of students felt as though they were receiving a comparable education to in-class learning.

So where does this leave us?

Today To The Future:

The effect that digital distance learning has had on society is undeniable. It changed the field of learning in both positive, and arguably more, negative ways. It’s difficult to tell how things will progress and how the past two years have impacted students in the long run. What is certain is that many schools have reopened their doors and are doing their best to get back to “normalcy”. With full-time distance learning a very real possibility for the future, finding a more permanent solution is a serious consideration. Having a viable platform capable of handling both sides of education is more relevant than ever. Emaze offers a solution that targets both complete content creation and puts the power back in the teacher’s hands with customizable LMS. Enabling both students and teachers to succeed. In and out of the classroom. With constant adaptation and growth, emaze does its part. And takes it seriously.  Progressing e-learning and bridging the gap between the benefits of in-class learning and remote. Emaze addresses the digital takeover and it’s impact on education, by uses it for the positive.

In the words of Elbert Hubbard, “the best preparation for good work tomorrow is to do good work today.” That is what emaze strives to do: good work.