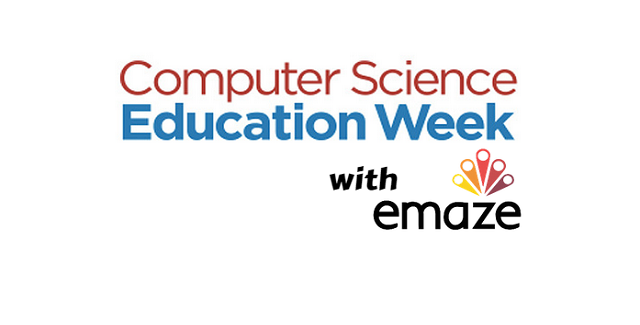 Computer Science Education Week: The Next Generation of Rockstars

emaze supports the Computer Science Education Week and the Hour of Code. The Hour of Code campaign urges students to learn to code.

This week, the world is celebrating the Computer Science Education Week (CS Ed Week), which highlights the importance of computer science in the education system.

The main idea of the Computer Science Education Week (Dec. 9-15), is to make history and recruit students to join in and do the “Hour of Code”. Lots of celebrities from show-biz and the silicon valley joined this program in order to inspire students to learn what most schools don’t teach – computer coding. This is definitely the key to change the world in the near future.

‘Technology touches every part of our lives. If you can create technology you can change the world.’ Here we are in 2013 and we all depend on technology. Advances in computer science have transformed the way we live, work, learn, play and even communicate with each other; technology is changing the world but meanwhile most of us don’t know how to read and write code.

Whether it is in medicine, transportation development, science research, or even fields like music, aesthetics and art – anything you can think of is empowered by computational skills.

Leigha Benford and Tanya Parker (CS students) wanted to get 10 million students worldwide for the largest learning event in history and make a move that may lead to an education reform or even cause conceptual changes in each and every one of us. “Create coders are today’s rockstars!” said will.i.am at the official video of the project, and he is possibly right.

In the near future reading code will probably be the new international language. As startup companies are popping up like mushrooms after the rain… predictors say that by 2020 there will be 1.4 million computer science related jobs available and less than 30% of them will be actually occupied by computer science graduates with the skills for these jobs. This will happen because only 1 in 10 schools today teach students how to code.

Malcolm Gladwell once said in one of his books “Outliers” that ‘the key to success in any field is, to a large extent, a matter of practicing a specific task for a total of around 10,000 hours’. So we think that one hour is a fair-enough deal.

Emaze encourages everyone to participate in the Hour of Code program. We believe that this is a fun, easy & challenging way for anyone to learn computer science and improve their own creativity. Everybody should learn how to program a computer because it also teaches you how to think. So join the revolution – and start coding.  It will become worthwhile some day.

To learn more about THE HOUR OF CODE you should check this: http://code.org/.