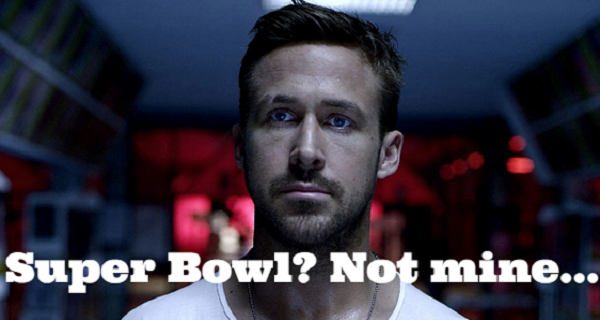 Now that Super Bowl XLIX (yes, that’s Football talk for Super Bowl 2015) is done. While some of you can relate, many of you will still be totally appalled by what was going through my head and thousands of others during your most holy day of the year.

Enough said. As someone of the female persuasion, I can tell you the first thing I’m thinking at the Super Bowl is check out those booties. It’s like they purposely wear tight spandex shiny pants to accentuate their greatest feature. At least I’ll have something to stare at and keep me entertained throughout this long game.

Once the initial excitement of those tight butts in shiny spandex wears off my mind begins to wonder…food. Where’s all of the guacamole, wings, chips, and cute brownies in the shape of a football. After all the food is the real reason we all come to the Super Bowl party anyway isn’t it? The puppy bowl is the highlight of any Super Bowl Sunday for many animal lovers. The puppy bowl is played annually on animal planet featuring the cutest puppies inside their own puppy stadium with commentators broadcasting their every move. Sometimes when I get bored watching the real players I imagine them all as adorable little golden retrievers.

4. “Why is it called football when everyone is using their hands?”

In just about every other country in the world football is used to refer to what we Americans call, soccer. So why exactly did we miss the memo on this one, I’ll never understand. As for now I guess we’ll stick with the ‘ol Football Americano.

By now you’ve probably heard about Katy Perry’s grand performance with her pals the dancing sharks. For those of us non-football americano fans this is the part of the game we’ve been waiting for. The suspense kills me up until the moment will Katy Perry be wearing? What songs will she sing? Will Missy Elliott one up her on stage? These questions keep me busy throughout the first half.

Wow all of this watching people running back and forth up the field is making me work up an appetite. Is there any chips and guac left? Seriously though these guys are in great shape, maybe this should be inspiration for me to get off the couch and start exercising every once in a while… 7. “I want to talk more about the commercials, but everyone’s so into the game.”

Seriously though, can we rewind and watch the Kim Kardashian commercial again that was like the highlight of this whole game so far. The commercials are a huge part of the whole Super Bowl spectacle. I find myself paying the most attention when the game is on break than when it’s actually on.

8. “I suppose I should start to pay attention for when people are talking about this at work tomorrow.”

One of the biggest repracautions of the Super Bowl is the next day, everyone will be talking about the game. Whether they’re devastated about their team’s loss or just want an outlet to talk about Katy Perry’s performance and Kimmy K’s hilarious commercial you better take notes so you sound good next to your colleagues.

9. “Alright, how many more quarters could possibly be left in this game…?”

Yawn. This game has been going on for about two hours too long at this point. Is it time for a nap? I hope no one will notice if I slip into a doze from this massive food coma and boredom.

Wow, it’s finally over. Wait who won? I don’t even remember which two teams were playing. So much for actually paying attention this year. I’m making it my goal by the Super Bowl next year to actually be able to follow this football game so I can follow along and make insightful comments. Yeah right…